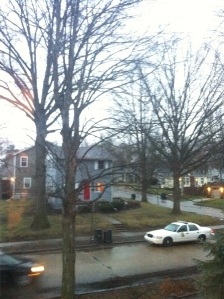 It was just about 5:30 and I was working upstairs and happened to notice out the front window that some guy was on the phone, facing the street, at the front door of the house across the street. He was kicking at the door like it was stuck, and it indeed then opened.

His buddy, another black kid 18, 19 years old, then sprung from the car parked in front of my house, and they both went inside. This should have triggered something more from me than it did. I was suspicious–why did the other guy wait until the door was opened to come out of the car? If the first guy was on the phone, was he talking to someone inside the house, telling them to let them in? And was THAT why the door then opened? And was I just wondering watching because it was a pair of black kids in hoodies? Was that racist of me?

I was curious enough that I went downstairs to get a look and write down the license plate on the car, but it was parked perfectly for me to not see it, right behind the tree. I moved to another window to get a better look at the plate, but it was somehow still obscured from view, likely not by accident. When the two came walking–not running, but walking with purpose, with a tv under one guys arm, and a stereo under the other, I was still not really understanding what was happening. Maybe they just bought that from them? It just didn’t click as fast as it should have. I started to walk out the front door-not to confront-but to get a look at the plate. But they sped off before I could write anything down.

So I rang, after a couple minutes of wondering what had just happened, (also this by the way is going on as AP and SPEED>com are about to break astory about one of my clients losing the funding to go indycar racing, so I was a little distracted on my own already) , the police. “I think I just saw a burglary”

The cops came soon there after, and pointed out, “of course, when someone calls in a white impala, you see 60 of them on every block!”

Then, the owner came home and was understandably upset and shocked. I went over to apologize, as I was really mad at myself for not just going upstairs and back up to the nook windows to shoot a good photo or two of the guys. He was more appreciative that I had called the police and given the descriptions, etc. but I was still pretty annoyed at my lack of quick thinking. I was half thinking I suppose, trying to get the plates instead of a photo.

The impression was that the guys knew what they were going for, to have broken in the way that they did and with taking things that were not in the front room. So maybe they’d been there before or something. Who knows. But it was obviously unsettling to see it happen in BROAD daylight, and of course, with it being across the street as well, not cool. When I went over, saw that when he was kicking, (the burglar on the phone..), he was REALLY kicking much harder than I thought…the deadbolt and locked door handle had just busted through the door frame, and they walked right in. Not cool

One thought on “So, this sucked” 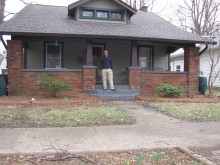