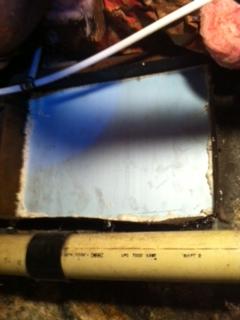 So it wasn’t actually open to the outside like the previous photo might have made it look…but, it was close. There was one layer of foam in the gap, and you could see light coming through it. So I did three layers of the foam to seal the space and did the crazy spray Good Stuff or whatever it’s called.

The best part was probably–the vent/gap/surround was simply filthy–every time I’d push the new layer of foam, cut to size, into the space, it’d evacuate all the dirt in the gap, right into my face. Good thing I wasn’t at those moments (at least not the second and third times…) mouth breathing.