Met a guy named Johnny Crocket through my neighbor Candice. Johnny is “great with trees.” This, btw, was after a weekend visit back to the dome where I decided I was going to trim a tree. After being told by passers-by that “…that looks dangerous” as I was leaning over a tree from atop a ladder with my electric (and annoyingly quickly dis-charging…) saw, and then subsequently was on the ladder in a latter incident where I literally forgot that I was on the ladder and started to step off  to get a little closer to the limb I was cutting. Hope my mom doesn’t read this.

Anyway, after making a big pile of cut off tree limbs in my back driveway and having no idea what to actually do with them, it seemed like it was time to have someone who actually knew what they were doing be involved. Bring on Johnny Crockett.

I already knew that there was a tree that HAD to go–north west side of the house…causing damage to the roof with every wind storm.  So Johnny gave me an estimate on that tree, the tree that I had trimmed before (I think it was a mulberry or some other “lower level” kind of annoying tree–it left all kinds of junk on the car cover for the alfa this spring…), and then pointed out a third tree that was dead (lightning) that would eventually be falling onto the fence that was there. Fine. lets do this.

The tree that was banging up against the house, the most guilty of them tree, I felt most concerned about just because it was going to be a big change to the sky-view from the dome. But so it goes…

They worked through the day and removed the stumps and the pile that I had created as well. Some rain and thunder meant that it was a return for day two in the morning to finish off. But looking at the photos, and watching the stuff get piled away, definitely gave credence to the concept of bringing in pros for some gigs. (see…why I hate painting….)

(you can see Johnny up in the tree BTW…) 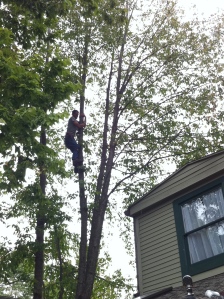 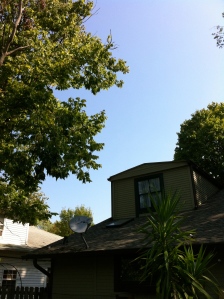